The first posting in this series examined the new Cathedrals built in England in the 20th Century, and previous attempts to build a Catholic Cathedral for Liverpool.  This blog posting will look at the feature that perhaps makes the Metropolitan Cathedral unique, certainly amongst other English Cathedrals: its circular space.

A circle has no beginning or end, one would imagine that such a shape would be entirely suitable for worship.  So why then does the Christian history of church design not carry an abundance of round churches? In a circle ones attention is naturally drawn to the center, which in many cases is where the altar would lie. It is interesting to note that this spatial effect is also created by gothic buildings where the transept crosses the nave creating a central space that has an air of openness, often (as in the case of St Paul’s Cathedral) crowned by a dome. In many of these gothic spaces today, a temporary altar is erected in this central crossing for the celebration of the Eucharist. Gibberd’s genius took this ideal a stage further, building from the center out, rather than lengthwise as in the case of the classical and gothic forms, working on the principal that all must be able to see and hear the liturgical action taking place in the sanctuary.

Whilst the idea of a freestanding altar is strongly supported in historical design, a gathering of people 360 degrees around the altar in worship is not. Obviously a flaw in this shape is the possible disenfranchisement of those who are behind the altar who may feel divorced from the liturgical actions taking place in the sanctuary. Gibberd addressed this issue by envisioning that on a week to week basis the congregation would be entirely within a 180 degree radius in front of the altar: the pews behind the altar only being used on those occasions that the cathedral was full to capacity.

Whilst the idea of round churches is not found in abundance throughout history, it is not without both precedence and theological soundness. Centrally planned worship spaces were frequently built for specific functions in early church such as baptisteries (often octagonal) or the tombs of Martyrs. 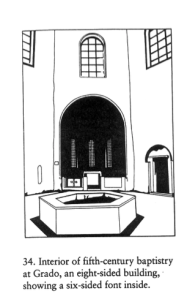 These circular, semi- circular and octagonal spaces, which may or may not have been the principal worship space of a given community, can also be seen in evidence in several Roman churches such as St Peters, and St John Lateran where seating for the clergy was provided behind the altar in a curved semi circular shape which may had figured a circular shape if the people were gathered in a similar position in front of the Altar.

These centralized plans find their origins in that primary meeting place of culture: the Roman baths! The placement of the bath in the center of the room, led in religious settings to the ‘bath’ becoming the pool in which immersion took place during the rites of initiation.

After falling out of favor, centrally planned churches were reintroduced during the renaissance as architects paid renewed attention to classical models and attempted to express the symbolic perfection of the circle and to represent the relationship between the universe and the deity through concentric plans. However, in the medieval liturgy, there remained a constant argument between those who tried to achieve this architecturally and the clergy, whose liturgical needs were for a directional nave, along which they might process towards the altar, and a sanctuary that was separate from the laity.  Examples do survive, such as the church of St Sebastiano, Mantua designed by the Italian architect, Leone Battista Alberti:

For further examples of round churches in the Roman tradition, see this posting by Fr Lawrence Lew OP

Published in 1960, Peter Hammond’s book Liturgy and Architecture looked forward towards the reforms of the Second Vatican Council.  Whilst stating that the Eucharist is a communal action, Hammond noted that within that community there is a diversity of functions, such as presider, lector, choir: Not every member of the Body of Christ holding the same function or office. Because of this, he states that a circular worship space would be unsatisfactory because ‘it fails to manifest the hieracrchial gradations of functions within the worshiping community.’ (p 41) Whilst supporting the idea of the congregation gathered round a free standing altar (a somewhat novel idea in 1960’s Catholocism) Hammond maintains that ‘the relationship between sanctuary and nave must express separation and identity.’ (p 41)  Clearly Hammond’s words were not heeded by Gibberd and other architects in the early sixties. Two noteable examples of central altars surrounded by seating built during this same period were both Benedictine communities in the USA. Hellmuth, Obata and Kassabaum were responsible for desiginging the new Benedictine Priory in St Louis, 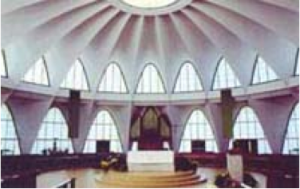 As monastic communities, the problem of how to fill the space ‘behind’ the altar was solved by placing the monks stalls/ seating there. This meant that at the daily office the monks were gathered alone in the sanctuary, and for Mass their seating became part of the whole church surrounding the Altar of God. Although the early RC liturgical movement was admitedly weak in England, some notable new church buildings were errected noting a change from the neo-gothic to what J.D. Chrichton desribes as a ‘vaugely Romanesque style owing something to Italian models.’ (Crichton, J.D. 1920-1940: The Dawn of a Liturgical Movement in J.D Crichton et al (ed) English Catholic Worship Liturgical Renewal in England Since 1900   London, Geoffrey Chapman, 1979. p 29-30)  One such example is First Martyrs Church Bradford: 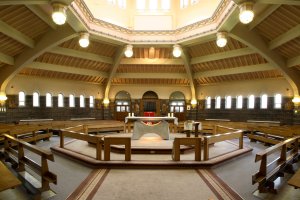 Having explored the use of circular space in Christian worship, the next blog posting will take an in depth look at the circular interior of Liverpool Metropolitan Cathedral.